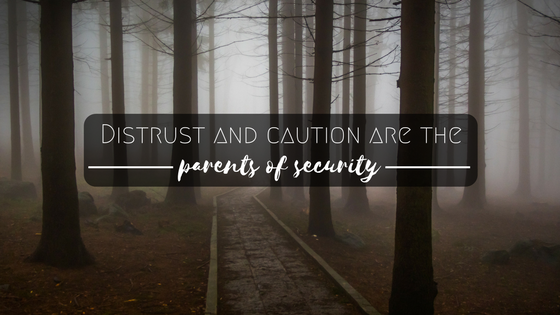 I liked Benjamin Franklin’s quote that I used for the featured image of this post because it speaks to the safety of security.  How distrust and caution can lead to the feeling of security and protection.  It’s true, too, that exercising caution can prevent injuries.

Financially, risk often outweighs the potential reward.  I don’t risk my money on a large purchase unless I know I won’t end up in the poor house because of it.  How does it factor into creativity?  Security speaks to me both analytically as a software engineer building applications and creatively as an artist crafting my books.  Am I writing too “safely”?  Am I building a “safe” world that has little personal risk for me of “doing it wrong”?  When I’m making jewelry, am I trying new things or do I tend to stay in the safe “kits” that don’t let me explore my creativity?

Judgment is the most difficult feeling to overcome unless it’s validation and acclaim.  Being told what we did wrong hurts on so many levels, especially when paired with the subjective creative material. To make inroads towards the heart’s desire, we must take personal risk.  Professionally, I know what that means, what success looks like, and what the way towards goal achievement is patterned as.

In writing, I don’t know what success looks like beyond “get published” and “make some money”.  How do I get there?  What kinds of risks are okay to take?  Will I fail?  Will I succeed?  I am plagued with the fear of moving too slow as well as moving too fast.  If I look too far beyond the finish line, I find I get blinded by the future promises of what-if.  What if I make it?  What if I become a successful author? What if I sell books?  Excitement for such a future can easily boil into your bones and drive you forward with a fevered frenzy of self-importance.  Of course, I will sell books.  I will be amazing.  I will get a movie deal, and everyone will love my book.

In the whirlwind of emotional excitement, the realistic voice often whispers in the ear.  “But wait…” it begins, reminding you that such a far leap ahead when you’ve not finished is not only folly but unrealistic.  As a first-time author, the chances of me getting stars over my head is very, very, very slim.  Maybe I’ll have one or two readers like my book should I finally get it written and published.  Maybe I’ll even get a handful.  Or maybe I’ll have a few handfuls of readers, but the glittering glitz of immediate success is like chasing gold in a cold stream full of rocks and mud.  Elusive and deadly.

Calmed down from my phases of excitement in how to market, sell, and brand a book I’ve not finished yet, I realize I’ve daydreamed away the line I was standing at.  Lost, I fear I’ll ever finish.  I fear I’ll ever make it to publication.  I self-doubt and second-guess every decision.

Do I play it safe?

Creativity falls like leaves in the changing seasons: each one is different.  The majority will be the same colors as the next leaf, drawn in shades of bronze and gold and muted neutrals with dried crisp veins of brown through papery crusts of what was once living.  Every so often, one will fall in brilliant colors.  Bright, blood red.  Golden, frail yellow.  Curled in intricate patterns.  They stand out because they are different.  They are celebrated because of their willingness to take a risk at the very edge of their leafy existence.

I want to be the bright leaf.  The strangely shaped leaf.  I want to take chances in my writing and forge through the forest of words on a pathway built out of my own, rough-hewn letter strung together in rickety frameworks of daring adventures.  I want to squeeze out the best and worst emotion.

To do that, I need to take the risk.  I need to turn away from distrust of the world and the outcomes of my decisions and scorn the caution that tells me to be careful.

Don’t make that choice; it won’t be well received!

Are you sure you want to teaser something that isn’t finished?

Are you sure you want to write that book?  It would be easier not to.

Are you sure you want to open yourself up to the world through a blog?  You have nothing to say!

Security isn’t just in standing far enough back from the edge, so you don’t fall off.  Security can come from daring to make the leap and fall into the abyss with no easily apparent safety net.

So I guess, I jump.  I keep writing.  I hope that I don’t look so far head that I lose track of the here-and-now, but I hope that when the time comes, I’ll know what to do next.