Little Month Around the Corner 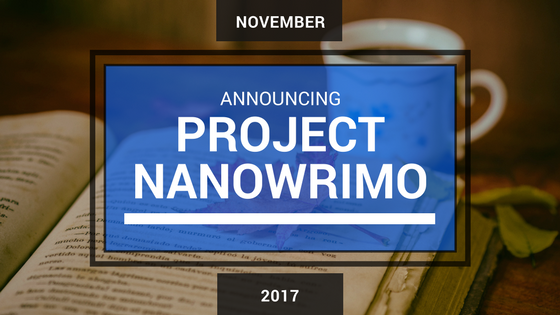 I begin with an idea, and then it becomes something else. ~ Pablo Picasso

This statement is very true for me.  As I close in on the last part of Origins — which may yet undergo another name change — the final product looks very different from that first NaNoWriMo start.  The characters are different.  Not only in name but who they are as well.  Subsequent NaNoWriMo years were used to polish and replace the story as I grew as a writer.  I’d like to sit here and say, “I have learned everything I need to know.  The next project will be easier.”

That’s simply not the truth.  It is true that I have learned some things, but I do not feel any more prepared for the next project than I dd for this project.  Cimin, Cameron, Kizete, and Josef are all close to my heart. In some form or another, they will have a large part to play in the overall story, but the story itself is a dark story.  Hopefully, it is a tale of redemption and the realization that life and choice have value and meaning, but the world is full of suffering.  At times, it is not easy to push Cimin forward in the face of her grief and uncertainty, battling self-doubts and questioning her self-worth.

So as I think about the end of this book, another idea came to me.  Okay, to be fair, the idea originated from my husband who also had a hand in the creation of the world of Origins.  I wanted to write something quirky and comedic — or at least try to write something quirky and comedic.  I have no idea if I can do it, or if this idea will go into the pile of malformed half-seeds of ideas that never properly germinated.

If I have time and can finish Origins in time to give NaNoWriMo a shot, I might just use Nano to springboard this idea.  Emma and Anya are already wiggling their way into the shadows of my thought.

Nano asks for a synopsis, and I don’t have one.  What I have is a stream-of-consciousness idea that I jotted down in a very loose way.  I’ve only loosely grammar checked it because that’s not what Nano is about.

It doesn’t even have a name.  It’s mere idea only.  So I’ll see where November takes me.  It might take me far, and it might take me nowhere!  The joy, as they say, is in the experience of the journey.

Emma longed for two things: to shed a good twenty-pounds (okay, thirty if she was honest with herself) and to be thought of as beautiful like her striking childhood friend. The blonde haired, blue eyed Anya. Tall, thin, perfect.

The problem with perfect is that it’s a pipe dream. Emma managed not only to find a witch, beg a favor, get cursed, but she managed to do this all in one day. That’s a whole ‘nother story, though. This story is about the consequences of meeting the witch that day. The dark wood (not really) that lead into bright, beautiful Southern California sunshine.

How could she be cursed?

Emma was gifted with the admiration of the men around her. Women too, if they favored that way. She didn’t get her thirty pounds taken off, or her flat brown hair turned blonde. She didn’t emerge from the Pacific Ocean like Ariel in the Little Mermaid.

(Pssst, it was a sea witch. Never listen to those. They’re terrible.)

Instead, she got a hundred dollar uber fare, ruined clothes, and a strange necklace she couldn’t take off. And enough suitors to shake a stick at.

The problem? A terrible accident befell all of them if they lingered around her for longer than it took for her to either run away (she did that), scream and run away (not her finest moment), or somehow managed to convince them she wasn’t interested.

What’s her tally now? Five broken legs, ten broken arms, a man with crotch rot, and the latest — an artistic young woman who might have interested Emma at a different point in her life — ended up in the hospital with typhoid fever.

Thankfully, they’ve all recovered. None of that matters, however, because Anya — the beautiful — needs her help. And with her cadre of doomed suitors, Emma is determined to help her friend fix her life and find happiness…

Oh, and breaking the curse would be nice too.