Be a brick in the sheltering wall of love and tolerance. Mortar yourself to others to fortify everyone standing against the darkness. 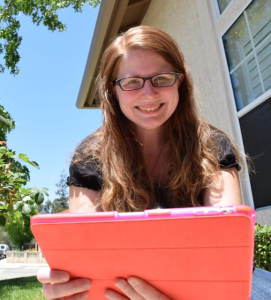 I am a software engineer by day and an author by night.

I have always wanted to be an author, however, and only recently did I finally embark upon this idea that I could craft stories.  I took part in my first successful NaNoWriMo back in 2014, though before that I had published a short story with another friend in an anthology.  It was a project that I did with a friend that showed both of us that we could spend the time it takes to write novels.  In April of 2015, I did my first standalone project, which I also completed.  That was the birth of the Kingdom of Rust idea, though, at the time, it had an entirely different name.  So now, here I am, creating software and working through my first book.

I’m an avid reader (the Book Nation that is slowly consuming my house tells me that I probably have at least a good 2,000 – 5,000 books) and I love to spend my free time writing in various forms.

Other interests and hobbies include photography, hiking, painting, and more!

Recently, I started making chainmaille jewelry. I started after getting inspired to make a bracelet that features in one of my books. Since then, I’ve realized that I have an affinity for it. So in addition to my day job and my evenings as a writer, I make and sell jewelry on Etsy.

Life Outside of Writing

Got my book order today from @mystgalaxybooks - ea

I decided to try and channel some of my emotion in

So I get the girls, @summerwinter_bengals the @meo

Valentine’s dinner with my love. 💗💕 #valen

It’s a Super Floof kind of Valentine’s day! Be

Rainy Wednesday and I don’t want to go to work.

Thanksgiving dinner on the @hornblowercruises Than

@pusheenbox reminds me that it’s the season for

It wouldn’t be an #adventurecation without some

Caturday catering to the princess! Winter is such

Now that MamaCat is off work, it’s snuggle time!

When you gotta shelter in place, it’s best to ge

Winter is here to share her cuteness with the worl

Summer spends her days like this. So here’s some

Winter made her own cozy blanket fort on this chil

This month’s @meowbox was a hit! The girls love

Some days, I feel like Winter. I’m not doing thi